Some Notes From the Road

I recently took a roadtrip down to see my mom in southern Cali. I was tired as I started out--overwhelmed with getting through the last term, feeling rather battered from personal and professional mis-perceptions, and exhausted from the two online public speaking classes. I didn't want to drive the 1000 miles, couldn't afford to drive the 1000 miles, and wanted someone to just take care of me. The magic of the road took care of all that.

The weather was perfect. Sunshiny and clear. I left a bit later than I wanted--it was nearly 6:30 a.m. when I hit the road. I was mentally grousing all the way from Portland to Eugene, grumbling under my breath and forgetting to listen to the music blaring through the car. Indigo Girls fi

rst thing and random CDs after that. I kept counting the mileage and the time and how long it would take me to get to Stockton (not much else between Stockton and Bakersfield to stop for the night. As much as I want to keep going as long as there is light, Stockton it is. Sometimes I call it Stinkton :) ). So I was driving tense, checking mileage, checking timing, grousing that I was driving, not listening to the best music around. A real fun time.

At some point between Eugene and Roseburg I started laughing at myself. "Geeze gurl," I thought. "You have been needing to get away from the house and the job and people for a long time now. And here you sit grousing?!" Then I remembered one of my philosophies of life: It is the journey, not the destination. So I settled in and enjoyed the ride.

As I continued south along I-5 heading to the Siskiyou mountain range, I noticed that clouds hung low over the mountains. The sun was all around but the clouds were hanging over the mountains, with the peaks peeking through them. They looked like a ring of

white hair with a bald dome head. As I came closer and started passing the clouds, it was the strangest view of the clouds. Have you ever stared at one of those 3-D pictures that take a while but if you look at them right, they magically become a picture? You know how fake they look (because they are just computer 3-D drawings), being able to see around the items like they are hanging suspended in the sky? That's how these surrounding clouds looked. Like they had been created by a computer. (The clouds didn't look like this picture but I thought the picture was way cool. It is over Mt. Ashland, though.) And as I drove through the mountains, I would go in and out of these fake clouds--sunny then pea soup fog...sunny and then pea soup fog all the way up over the Siskiyou Pass and down again. Sunny as I hit California and stayed that way for the next week :)

As I passed the first weigh station in California I noticed how cool the CHP station looked--like a large Alpine Lodge.

Coming down through a pass in the Shasta National Forest moving in to Dunsmuir, the mountains were so large that the semi-trucks down the road a piece looked tiny. My little beetle was very tiny compared to the semis. Sure put my puny problems in perspective.

I spent the night in a Comfort Inn Motel in Stinkton. It was one of the worst motels I have stayed in through the years. The toilet wouldn't flush. I could never find the ice machine. I had no idea what channels I was watching as there was no information in the empty three-ring binder on the desk. Internet did work for me and I had a lovely chat with my cousin :) Although I must say that the Vagabond Inn in Redding coming home was even worse--toilet flushed but kept leaking and refilling all night, toilet seat kept coming off the toilet, could hear the flush from above cascading down next to my head, and it was pretty dirty. The Internet access didn't work either. BUT above all, the roach motel in Colinga where we stayed in 1980 tops everything!

Passing along I-5 corridor, I saw hundreds of small birds in formation. It was beautiful! They twisted and turned with the precision of a black and white psychedelic screen saver. Amazing art in real life. 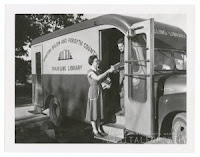 Along the side of the freeway in an old junk yard, I saw an old rusted out Bookmobile. I loved our Bookmobile when I was a kid. There was no library near us out in the country, so twice a month (I think) the Bookmobile would come to my elementary school. The teachers would take their classes out to the library and later Mom would come pick us up from school and visit the library herself. I remember when I read my first book in one day and asked to go back to the library. Mom didn't believe that I had read the whole book until I told her the whole plot. I was in second grade and it was obviously time to move up to more complicated books. Less pictures and more words. One of my favorite of all time books is To Kill a Mockingbird. I checked it out from the bookmobile when I was maybe fourth grade. I loved the Bookmobile.

As I headed over Grapevine and Tejon Pass, I saw a huge store for Famous Footwear and wondered who was their audience? I mean do people stop there, thinking "Hey! I'm going over Grapevine and might need to get out and push! Perhaps I need some new cheap shoes!"

Coming home the following Friday I was lost in the magic of the music. As I listened to the Beatles I remembered something else. It was time for me to "get back to where I once belonged." It is time to work on finding my lost giggle bubble, to rediscover myself. I have been unhappy for such a long time. It is time.