Putting Toes to the Test 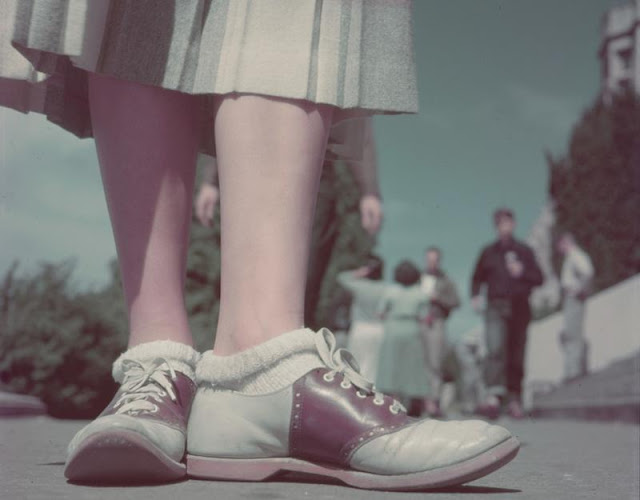 I've been taller than most all my life. I think I was born tall. I always liked being tall, except when kids called me Jolly Green Giant or asked, "Hey! What the weather like up there?" I always wanted to say, "Grow up and find out!" but I was afraid I would hurt their feelings and just said, "No rain yet!" or something similar. So it wasn’t that I was sad or unhappy I was tall; I just didn't want to be teased too much about it. Like I was a freak or something. It was especially hard when in high school, you know like before the boys got their growth. Seemed like they loved to be the protector over a cute tiny girl. Oh well, I eventually dated and life went on.

Having a tall body meant I had large feet. No two ways about it, my feet were big. No one in our town, while my sister and I were in late elementary and junior high school age, sold shoes the size of our feet; we had to ride into Los Angeles to buy our shoes. Buying shoes was a big deal. The shoes cost a bit, so Dad told us to "take big steps." That was so, he said, the shoes would last twice as long. 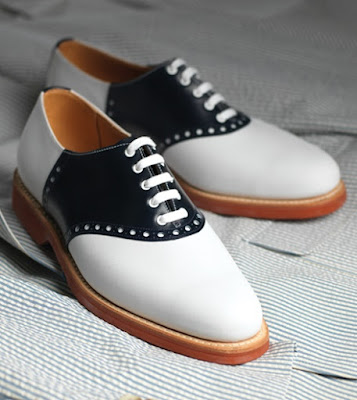 The final straw was that the ugly bobby socks with the super ugly all-white saddle oxfords looked like BOATS on our gigantic feet. We couldn't even have two-toned saddle shoes to break up the walking film-screens! Just white. Big ole white boats. See, we were already big girls; now we had to wear these clodhoppers. I was afraid that people would scream as we approached, worried we would stamp down all buildings and trees, people as we stomped our way through town.

Here's the thing about saddle shoes. They used to be really popular. They got their name from the saddle-like shape of the piece of leather sewn across the waist of the shoe, usually in a contrasting 2-tone color. They debuted as a woman’s fashion in the 1920s. First they were for male golfers—the black and white went with their golf outfits—back in the 1910s. But by 1920s, women really liked this casual wear and took them over as their own. In the 1930s, Spalding—the company that made the shoe—started making the shoe "depression affordable" By changing the composition of the sole—from rubber to cork—and the style continued.

And then came the 60s and the style tanked. The 1960s was a decade of rebellion. We were eager to forge our own path and balked at the traditions of our parents. The saddle shoe fell victim to this trend. The iconic black and white shoes were now seen as a symbol of the establishment that we '60s teens were rebelling against. The popularity of the saddle shoe dropped drastically. 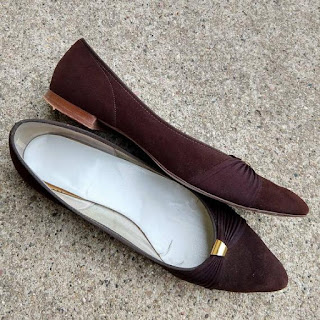 Unfortunately, Mom didn't understand this. Unfortunately, Mom loved the look of all-white saddle shoes with turned down white bobby socks. Also unfortunately, I hated them. I would take off my socks on the bus to school so I at least didn't have those stupid bobby socks that no one else wore. My sister says, "Yes, two of us would get on the bus wearing socks and only one of us would get off the bus at school wearing socks." When I could buy my own clothes, I bought some flats with pointy toes and tried to wear those. Never again would people scream in fear that their town would be stamped to the ground! Of course, my feet were still too big for those flats, but dangnabbit I was going to look like everyone else! 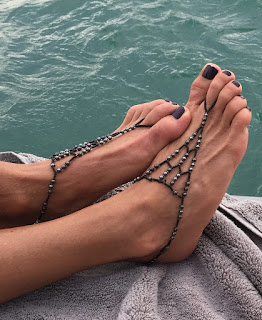 And then I went farther than most. I tried to go to school barefooted. Yeppers, I had some cooooool barefooted sandals that really fooled them for a couple of days. And then *sigh* I was once again sent home to change my clothes. But if I actually returned to school, I wasn't wearing any stupid saddle shoes!

I still have big feet. I was told that a tall person needs large feet to hold them up. With little feet they would simply fall over. No base...it's all about the base. But also know I still don’t like the looks of a saddle oxford. Boats can sink; bare feet rule.

I loved your story(and Pat's). Were you allowed to wear other shoes once you got to Montclair High? Or, did I read this too fast and missed it? I don't remember you in saddle shoes in high school. I'm sorry you had to go through this. It's tough for any kid to be forced to wear things that draw negative attention. I had to get a butch haircut every summer, which I hated. My barber was my father. At last, the summer between 8th and 9th grade I didn't have to get the butch.

What is it about girls not being allowed to shave their legs? My father gave both my sisters grief about that. Was it your mom or dad that kept you and Pat in Hairy legs?

Once again Doris, I loved reading your story.

There is a company in Vernonia Oregon that sells Saddle Shoes. I never found them to be very comfortable.

Ah yes, saddle shoes! Since I'm a "little older" than you I was excited when they were popular. I might have been wearing black shoes before the saddles came in. I had both brown and black pairs (rainy winters meant the shoes had to dry out so 2 pair were necessary). In mid high school the cheerleaders wore them and even more girls had them. Ah yes, then we had the flats. Not good to walk to school in so I wore an old pair to walk in the rain and the dry pair for school or other appropriate outings. Let me know if you have any size 6 you'd like to share.

Thanks for my throw-back memories.