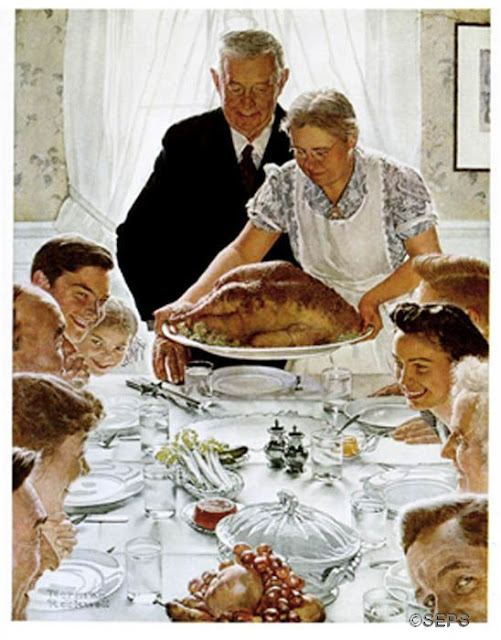 As hard as it might seem to believe, I was a shy little kid. Looking at pictures of holidays and family celebrations, I was the little wide-eyed deer-in-the-headlights one sitting with the cousins. See, we didn't get together with cousins and aunts and uncles often--mostly just holidays--and I didn't know them well. I knew and loved our grandmothers, but the rest were just not part of our every day life. Plus, I was the youngest in my mother's family with the oldest about the same age as my mother. I was the second youngest in my father's family. Everyone seemed older than me.

Thanksgiving was the holiday of food and family. Some years we'd spend Thanksgiving with my father's family; some years with my mother's. And some years one of the grandmothers would eat dinner with the other's family. The meals were usually at a grandmother's house, but every so often we'd have the dinner at an uncle's or an aunt's house. Once in a while at our own.

Both families were so completely different than the other. At our Nanny's house, they would set up the table in the living room--the big wood table over by the door and the kids' table closer to the kitchen. There was always lots of talking and laughter. The picture in my head is of my Aunt Wilma half-standing as she is passing a dish across the table to my uncle, talking to and looking toward another aunt on her right. Then as she sat down, she was licking her fingers from the food she passed. It was lively and happy. 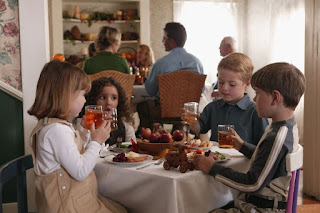 At our gramma's house, the meal was more interesting. Not in the liveliness of the conversation because I never actually remember hearing them talking. I'm sure they did and had great conversations and laughter, but the little kids' table was outside! It was really cool. Gramma had a wonderful old two-story house with a wrap-around porch. The window from the dining room was facing the porch and that's where we had the kids' table! So the window was open, a food tray was between the inside table (a gorgeous ebony table that had a white plain table cloth with a lacy one over it) and the window and the outside table. I loved it! So we could eat and be silly and no one had to ask us to be quiet-they-can't-hear. 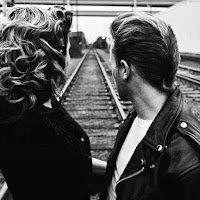 At Nanny's after dinner, the old cousins and the dads would head out to the side yard for a smoke. My sister and I, being some 15-20 years younger than the cousins, didn't join them. They scared me with their white t-shirts and ciggies rolled up in the sleeve, their hair slicked back in ducktails, talkin and laughin. We little ones just stayed away, peeking at them when we could without being seen.

At Gramma's, the cousins were generally closer to our own age and we would play games. One game was so fun. We would walk out to the end of the porch steps wall and jump as far as we could. Sometimes we would climb up to the porch wall itself and jump over Gramma's hedge. Robert, the youngest (one year younger than me), couldn't always make it over the hedge, but he was always game to try.

As we grew up and went on our own, we had our own traditions for Thanksgiving. We lived a thousand miles away from my family. My sons had their own tradition--playing Thanksgiving Day Mudball with the neighbor kids out in our rain-filled side yard. Some might call it "football," but it was too muddy and splashy for us to give it that name. My sons sometimes went to their father's for the holiday. I might be invited to a friend's for dinner at those times. If I was dating someone, perhaps we'd join his family. When I started working at the corner store, I would usually work on the holidays. And we'd always celebrate with a fresh-baked pie :)